LSD, standing for lysergic acid diethylamide, is a synthetic chemical that has been used for its psychedelic properties since the 1960s when it was first created. It is also known by the names acid, boomers, yellow sunshine, or zen, and is most often sold as a liquid in a small bottle or that has been applied to blotter paper or other small edible items such as sugar cubes. It is a Schedule I drug under the Controlled Substances Act, which includes the most restricted drugs with high potential for abuse and no medical benefit. Although LSD use does not cause physical addiction, psychological dependence is still very real. LSD users can quickly become addicted to the feelings that LSD provides for them as a quick and easy escape from the reality of daily living. 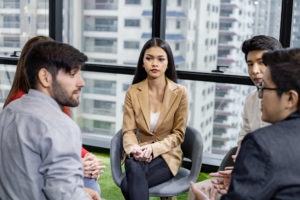 Although these drugs are not restricted to a certain population or group, LSD abuse happens more often with young adults and even high schoolers. LSD is in the drug class of psychedelics and is often used by this population to experience an LSD trip. According to the Alcohol and Drug Foundation, “When small doses are taken, it can produce mild changes in perception, mood and thought. Larger doses may produce visual hallucinations and distortions of space and time.” However, the tolerance of those abusing LSD increases rapidly; the person requires more and more of the substance to have the same effect. Although the drug is not physically addictive, just like someone can get “addicted” to a bad habit such as biting their nails or eating too much for comfort, someone can also be addicted to the psychological effects the drug brings them.

Unlike biting one’s nails or eating too much food, however, those who abuse LSD are in great and immediate danger. Anyone who uses a drug, no matter how small the dose, has some risk of negative effects. Often, young adults will use a substance such as LSD out of curiosity or subconsciously coping with mental health issues in an unhealthy way but never do they think this would lead to substance abuse down the line. LSD rehab centers such as the ones with Archstone Behavioral Health are here to break myths such as this and to encourage individuals to attend effective and quality treatment programs as soon as possible.

Taking too large of an amount of LSD, which is not unlikely due to the precise dosage needed to produce the desired effects, can lead to someone experiencing a “bad trip.” This might include disturbing visual or auditory hallucinations, which can result in someone experiencing panic or being shocked into a state of psychosis. Individuals are even at the risk of self-harm or suicidal behaviors at this time. Emergency services should be contacted immediately when an individual has overdosed as the negative psychological symptoms could lead to extremely dangerous behavior, whether to self or others.

One of the major and scary long-term effects of using LSD is unexpected flashbacks which can happen days, weeks, months or even years after using the drug. These flashbacks can last a few minutes, can be extremely disturbing, and can happen to individuals even if they only used the drug occasionally or have not used the drug in a very long time. This is just one reason why ongoing support is especially needed for this type of substance abuse; these unexpected flashbacks can be triggering and distressing, perhaps even reinforcing other substance abuse if the individual never gained healthy coping skills through the attendance of a proper treatment program. Those who are addicted to LSD require treatment from addiction professionals who are trained to help with these issues.

Due to the flashbacks experienced by those who have used this drug, many individuals develop mental health issues or experience the worsening of existing mental health issues. The flashbacks may cause anxiety or PTSD as an individual has a great potential to have experienced trauma during the use of the drug. Someone may fear triggering a flashback by experiencing stress or even exercising, which can cause them to lean towards avoidance as a coping strategy. Additionally, the symptoms produced from a bad trip or taking too high of a dose can lead to long-lasting psychosis such as the development or worsening of schizophrenia or severe depression.

Attending a Treatment Center for LSD Addiction in Lantana

An addiction treatment center is a safest and most comfortable place for an individual to recover from an LSD addiction. When an individual first attempts to quit LSD, they may experience psychological withdrawal symptoms such as an increase in physical discomfort, anxiety, depression, and insomnia. When someone is checked into our treatment facility, we are able to monitor these withdrawal symptoms as well as work towards relapse prevention for the future when long-lasting symptoms may arise again, such as uncomfortable flashbacks.

This is worked on during in-house addiction therapy, which includes both individual and group sessions. Individual therapy can be extremely helpful in creating new habits and enforcing new coping skills, as well as gaining an understanding of triggers and context through the use of cognitive-behavioral therapy during sessions. Group therapy can be a valuable space to exchange advice, experiences, and fears with others who have been through the same drug abuse and treatment.

Given the overlap of LSD abuse with mental health issues, our LSD rehab center includes mental health services to address the core and worsening of the addiction. Our comprehensive services at Archstone Behavioral Health create lasting change and healing. Because we also realize how vital it is to have support when leaving inpatient treatment, we welcome family members to be a part of treatment as much as the patient is comfortable– whether this is weighing in on treatment options, attending educational classes, or coming to a family session with a treatment provider.

Reaching out for help is your first step in recovering from addiction. Substance use disorder doesn’t happen overnight; recovery also takes time. Give your brain and body time to heal. Reaching out for help is the only way for many people to regain control of their lives. Contact Archstone Behavioral Health in Lantana, FL, today at 561.631.9478 to find out more about whether our addiction treatment programs are right for you or your loved one.